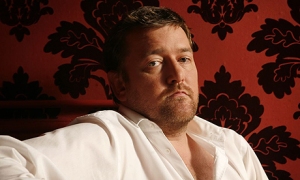 “It isn’t essential that music innovates; it can be a commodity, a quick fix, something reliable that matches the coffee table. That’s fine. I actually think that’s how most people use music. But for those of us who turn the journey to work into a scene from a different film every day depending on the soundtrack, who cling to a good song on a bad day like a life raft, can conjure a memory instantly from the opening bars of an old favourite, who have the same feelings when hearing an album we don’t listen to any more that we do when thinking of an ex-lover… there has never been a better time for music.”

“Only love can break your heart” I think is the Holy Grail of lyrics. I think when Neil Young wrote that down he must have checked every book and every record he owned to make sure it was original. It’s so simple and timeless.”

Random Notes about Elbow and Guy From The Guardian:

1 In the early days of the band, Guy Garvey’s temper tantrums were such that the rest of the band took him to one side and said that if he continued being so unreasonable he would be out. He has remained a calm and reasonable man ever since.

2 John Cale selected Elbow’s ‘Switching Off’ as one of his eight records on Desert Island Discs.

3 Elbow were the first British band to perform a concert in Cuba outside of Havana. Government agents followed the band throughout their stay.

4 Among the band’s unlikely cover versions is ‘Independent Women’ by Destiny’s Child.